Alyssa Scott (she/they) is a small-town girl with big dreams. As a first generation Thai American, Lys has projected many aspects of her persona over the years trying to fit in and stand out. From high school class clown, to introverted 20 something battling with anxiety and depression after coming out as a member of the LGBTQ community, Lys went on a winding journey of self-discovery. Destiny aligned her with her bandmates through a job working at a restaurant. Lys later lost that job in the chaos of 2020, but the uncertainty of isolation and all that it brought forced Lys to put pen to paper and begin writing. Those journal entries would later become the master works of her dynamic debut album, squashed dreams & broken wings, which is saturated with playful and nostalgia-inducing hip-hop gems.

When reflecting on squashed dreams & broken wings in an interview with Traklife, Lys had this to say: “My first album felt like I was meeting myself for the first time; I was learning things about myself like heartbreak, trauma, what brings me joy and happiness, and represented what felt like a conversation with myself.”

Since releasing her first full length in June 2021 Lys has performed all over Pittsburgh with her band, Lys Scott Deluxe, whom she had met working in restaurants. Through live performances featuring tracks like in-your-face banger “big shot” and cozy crowd favorite “flowerchild,” it became very evident in the local circuit that Lys was bringing an energy to the city that had not been experienced before. 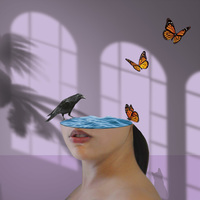