Gaadge (with two A’s) is a project created by Mitch DeLong in the summer of 2014. After recording and releasing the bedroom demo “Whirl” and playing scattered shows of original music with a changing line-up, the project lay dormant until DeLong relocated to Pittsburgh, Pennsylvania in 2016. It was here that he reunited with drummer Andy Yadeski and guitarist Ethan Oliva (two members of lo-fi juggernauts “Barlow”) and met bassist Nick Boston.

With the band slowly coming together, Gaadge released the Gaadge / Barlow split cassette tape with their fellow bandmates on October 31st, 2018. Recorded entirely at the band’s practice space, the tape showcased sounds ranging from My Bloody Valentine’s fuzzy wall-of-noise, to Pavement’s chiming guitar melodies. This release inspired DeLong to immediately begin writing a follow up, full-length album: Yeah? Recording for the album began in April of 2020 and was also done in the band’s practice space, as well as Oliva and DeLong’s house. The final product was mixed and mastered by Ryan Hizer of Good Sport and Trey Curtis.

Yeah? is the realization of Gaadge’s fever dream: a wild ride through varying genres of alternative music. Within the first minute, the album sucker-punches with a blistering flurry of guitars in the “Intro”, cradles back down with lush synthesizers and quiet acoustics in “Creeping Weeks” and sends the listener off on a journey into everything in between. “Do What Now?” soars as a shoegaze anthem, while “Twenty-Two” twists and bends jangly guitars around a thumping pop jam-out. 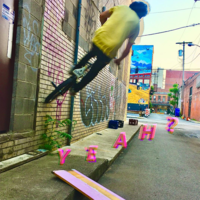