Forever the songwriting outlet of Philadelphian Dan Forrest, Buddie is a 4-piece band now based in Vancouver, BC, Canada that writes fuzzy, poppy, rock songs about environmental and social justice and simply trying to be a good person. Transplant, Buddie’s upcoming EP, is the band’s third body of work following their debut EP Change of Scenery (2019) and LP1 Diving (2020).

After the success of Diving, which featured critical nods from Spotify, Apple Music, Bandcamp, WXPN and many others, the band returned to the studio to record all of the music that had been brewing since recording their first album. The next batch of songs, nearly 20 in total, was recorded with a sense of urgency in mid-2021 as Dan Forrest moved to Vancouver shortly after to begin a graduate degree in sustainability.

Since the move, Dan has reassembled the band, performed at festivals Music Waste and Sled Island (opening for Built to Spill), and even did a live session at radio station CiTR 101.9 FM. With that said, Buddie is eager to share the music they recorded nearly two years ago.

Transplant speaks to Dan’s feelings about the move across North America, while also shedding light on 2020’s world-changing events and their impacts on the people and places he holds dearly. Sonic experts are calling for a 100% chance of fuzzy guitar goodness layered on top of Forrest’s meticulous songwriting which will surely keep you warm and in good spirits in the winter months ahead. If you like the EP... just wait until you hear Agitator (LP2 coming in 2023). 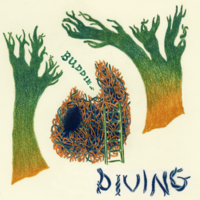