David Jacober is a seasoned, and well-recognized, native Baltimore-based percussionist, song writer, composer, recording artist, session musician, and drum teacher. He is best known for his role as drummer and as 1 of 3 founding members of the band, Dope Body (Drag City Records), which formed in 2008, toured the U.S. and Europe extensively from 2009-2016, released more than 4 full length records, being recognized by local and national outlets along the way. Dope Body came out of hiatus by releasing two albums in 2020.

Over the years, Jacober has made a name for himself in Baltimore and beyond by drumming with various bands and performing his own music as a solo musician. Aside from his own work, David has also recorded marimba with Future Islands and recorded and toured extensively with Baltimore based, electronic musician and composer, Dan Deacon. Currently, David is drumming with Dope Body, Loris, Ed Schrader’s Music Beat, Scroll Downers, Nerftoss, and working on his 6th solo record, Light Years, while earning a MAT from Goucher College.

Light Years is the newest release from Jacober, the solo project of Dave Jacober featuring Tariq Ravelomanana (Infinity Knives / Loris) and Allison Clendaniel (of the ‘Mind On Fire’ collective). This record explores the ideas of growing pains and reluctant optimism through lush, multi-layered marimba and drum-driven compositions. Created after a time of intense personal change, this album is a look backwards from the initial stable moment after adversity. As defined by the International Astronomical Unit, a light-year is the distance that light travels in a vacuum in one Julian year. Aptly named, this record is a reflection on the distance the artist has traveled through to get back to the light and be here now. Light Years is set for release in May 2021.

Jacober’s dealing with an unusual aesthetic here, but the results are brashly potent. The drum kits, drum machines, and sparse array of instruments that back up the dominant marimba remain sleepy and unintrusive, while sparring with a handful of wordless vocal chants and old school synth notes through brilliantly formulated melodies. It’s as much a sort of sleepy cousin to Tortoise’s Millions Now Living Will Never Die as it is menu music for the slowest ever edition of Monkey Island. That is to say it’s very good indeed. - The Quietus

David Jacober is best known for bashing the ever-loving shit out of drums in Baltimore noise-rock outfit Dope Body, which makes this album all the more unexpected: a collection of marimba compositions dappled with bleary electronic touches. The Gray Man hovers with a meandering grace, but Jacober’s bright marimba anchors each ambient wash and delayed vocal, preventing everything else from floating away. Coming only a few months after his main band’s skronky Drag City release Kunk, consider this album both trick and treat. - FACT Magazine

Straight from the percussionist rhythm section beheld in Dope Body, David Jacober riddles minds with his newest release on Geographic North entitled, The Gray Man. Wielding a vibraphone — paired with varying, low-lite, background tones — Jacober recorded The Gray Man in the dead of winter in his grandfather’s beach house in Ocean City, MD, enlightening listeners with a musical photograph of how that mood permeated. Like sinking into an old chair that someone else broke in, engulfing the aroma of their home and maybe a coffee stain, Geographic North did right by gripping The Gray Man by Jacober in light of ending all the summer’s treasures frozen in pulsating tones (considering the label’s Sketches of Winter series). - Tiny Mix Tapes

His solo music is mainly based around his marimba playing, singing and drumming. It leaves listeners with very colorful, rhythmic and deeply melodic Baltimore pop music. Jacober's debut album goes from moments of tight drums and ostinato rhythms to free floating spans of loose, jangley, quirky pop all led by very The Unicorns-esque vocals. - The Lion's Mansion 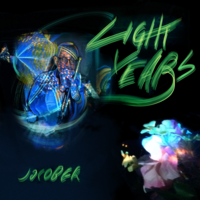