With Zoom university on autopilot, Sebastian Kinsler (guitar, production, vocals, bass) and Ryan Walchonski (guitar, vocals) formed the recording project in Ryan’s student apartment in South Oakland, Pittsburgh, in February 2021. The duo then added Ryan’s roommate Jake Kelley on drums, and, moving swiftly on a wave of creativity, the trio released their first EP under the title modern tourism in May 2021, with artwork contributed by future member Lydia Slocum (vocals, bass).

After officially joining the band in June, Lydia brought sweet vocals, earworm melodies, and punchy lyrics, in addition to playing bass with the live band. From summer to fall this quartet played their first shows at DIY establishments in Pittsburgh and Philadelphia, gaining enough underground traction to connect with their favorite indie bands.

Looking onward to 2022... the band is working on some more music and playing shows as COVID-19 permits. Ryan is in DC and Lydia is in Mechanicsburg, while Sebastian and Jake are in Pittsburgh for the time being, but they make it work. As a treat, they have teamed up with Crafted Sounds for a special reissue of modern tourism, which will be available on limited cassette tape format March 11. 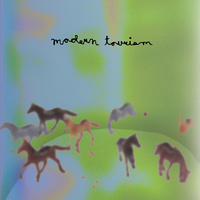